E28 is still work in progress, the car is pretty much ready as stock except the drivers seat position because of the size its very hard to fit him inside the car thats why i recommend to not USE IT. 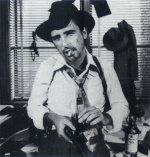